I love to watch trashy, schlocky, B grade flicks the cheesier the betterer, and if it's got zombies, nazis, heavy metal boof heads, punk rock deat beats, nerds, monster sharks or monster anything really, or Dolph Lundgrein in it i'll give it a crack. I will  post a mirco review of the disater pieces I watch here on my schlocakarama blog. But I will also post related B movie guff and pictures on here -  http://instagram.com/schlockarama and full flick reviews here http://085c3n3.com 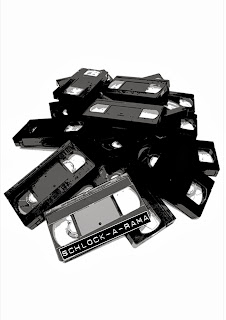 
Plot Summary 2009 After an environmental disaster, the arctic regions of Scandinavia have become a wasteland, a battlefield for the army and rebels' guerrilla troops. A bunch of crooks with motorbikes, lead by 'Duke', is terrorizing the civilians. An escaped prisoner, Jake, has personal reasons for killing Duke, and he gets help from the locals, including a girl suffering of amnesia and a harmless nutcase. The time for payback is to come, but Duke has decided to strike first. Motorcycle goons, fruity post apocalyptic costumes and raindeer- Brilliant = The Last Boarder

Plot Summary Solid proof that Z movie-making was alive & well in the 90s. This is a Z-movie version of Predator see the hunter taking on high school jocks & cheerleaders, complete with cheesy acting, fruity aliens and Roddy McDowall = Star Hunters

Plot Summary A young Texas boy has a knack with electronic equipment. He gets a job as a roadie with a raucous traveling rock-and-roll show to get the girl of his dreams. It's got Alice Cooper as himself, Blondie playing live and stars Meatloaf = The Roadie.. Awesomely 70s

Plot Summary Macarthy, John Jarratt, is a young star footballer, playing for the small country town of Kyneton. Macarthy is kidnapped by strongmen from the South Melbourne Football Club, using a helicopter in an innovative manner by club president, Colonel Ball-Miller Barry Humphries = The Great MacArthy (1975). So awesomely Aussie is hurts.

Plot Summery. Singapore's top policewoman, Miss Cleopatra Wong, who heads the Seasian Interpol Criminal Investigation Department (C.I.D.), teams up with her Filipino counterpart to bust a counterfeit currency operation that threatens several Asian countries with bankruptcy. Their dangerous quest takes them from Singapore to Hong Kong and finally Manila where they locate the counterfeit ring's Asian headquarters, which is being run by local nuns, forced into slave labor. The martial arts action is fast and furious as Cleopatra and her teams launch an attack to destroy the counterfeiter's and their headquarters in an explosive finale in this fun-filled, action-packed adventure = They call her Cleopatra Wong (1981)

Plot Summery. The Umbrella Corporation's deadly T-virus continues to ravage the Earth, transforming the global population into legions of the flesh eating Undead. The human race's last and only hope, Alice, awakens in the heart of Umbrella's most clandestine operations facility and unveils more of her mysterious past as she delves further into the complex. = Resident Evil: Retribution (2012) More of the same, but else would you expect.

Plot Summery. After witnessing the brutal murders of a convenience store owner and his son by white supremacist ; firefighter, Jeremy Coleman is forced to testify against the crime lord, Hagan, he is placed in the witness protection program. As his new identity becomes compromised Jeremy is forced to take an unexpected course of action in order to get his life back and save the lives of those he loves and it's got Bruce Willis in it = Fire with Fire (2012)

Plot Summery. This is the story of an Interpol agent turned restaurateur, out for revenge against the gangsters that cut off his arm and killed his bride. This tragedy left him deeply depressed, and his battle with depression has to be won first before he can be thoroughly trained in martial arts. After his training, Ortega hunts down his adversaries for a final reckoning. = The One Armed Executioner (1983)

Plot Summery. When her Great Aunt dies, famed horror hostess Elvira heads for the uptight New England town of Falwell to claim her inheritance of a haunted house, a witch's cookbook and a punk rock poodle. awesomely cheesy filmic debut to show off the scream queen's ample assets = Elvira: Mistress of the Dark (1988)
Plot Summery. A young man's struggle to survive in the aftermath of a deadly undead outbreak during the American Civil War. Has all the elements you could hope for in a period piece undead epic, gore, cool zombies, character development, however the narration did my head in and a shorter running time could have helped = Exit Humanity (2012)

Plot Summery When the grandson of a gun wielding woman is murdered by neo-nazi surf punks in the post-apocalyptic future, this grandma hunts them down for some bloodthirsty revenge. Vintage Troma brilliance =Surf Nazis Must Die (1987)

Plot Summery Okay, it’s still basically an ultraviolent revenge fantasy for adolescents but at least there are nods to BLADE RUNNER and TOTAL RECALL in the UniSols mind-bending implanted memories and more than a few references to APOCALYPSE NOW. Massive body count, which you'd expect and the effects team went into overdrive on this one, so many exploding heads Dolph and JCVD are hardly in it, but the reprise the roles well = Universal Soldier: Day of Reckoning (2012). Awesome arse kicking action flick

Plot Summery Taking a Reservoir Dogs approach to the whole bank heist scenario, by depicting the scenes post-robbery, and the geezer gangster flavour of Lock Stock this flick manages to create a realistic, light and fun zombie-horror-comedy, especially keep an eye out for the undead clowns.. Hilarious = Gangsters, Guns & Zombies (2012)

Plot Summery When a bumbling pair of employees at a medical supply warehouse accidentally release a deadly gas into the air, the vapors cause the dead to re-animate as they go on a rampage through Louisville, Kentucky seeking their favorite food, brains. : The Return of the Living Dead (1985)

Plot Summery Two episodes of the TV series "Spider Man" edited together and released as a feature. Fruity as hell!! Spider-Man and the dragons challenge (1980)

Plot Summery The government hires a feminist at the local university to track down the Piranha Women living in the uncharted Avocado Jungle (westernmost outpost is San Bernardino) to convince them to move to a reservation condo in Malibu. She hires a guide at the edge of the jungle, a male chauvinist pig, and they have many arguments about men and women as they work their way in, and eventually confront the Piranha Women. --Cannibal Women in the Avocado Jungle of Death (1989)
Posted by obscene at 4:42 PM No comments: